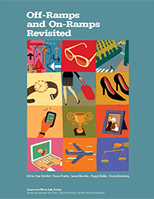 Five years ago our groundbreaking study “Off-Ramps and On-Ramps: Keeping Talented Women on the Road to Success,” (see Harvard Business Review, March 2005) found that 37 percent of highly-qualified women take an off ramp--voluntarily leaving their jobs for a period of time. In addition, fully 66 percent take a scenic route--working flextime or part time for a number of years. All in all, nearly three-quarters of the accomplished women in this 2004 survey failed to conjure up the linear lock-step progression of a successful male career. For this they paid a huge price in terms of both earning power and long run promotional prospects. In the fall of 2009 we conducted a new survey--using the same questionnaire and sampling a similar pool of women--indeed, we were able to capture some of the same respondents. We discovered that the ground had shifted in some interesting ways. (6/1/2010, Report - 68 pages)