The Sponsor Effect: Breaking Through the Last Glass Ceiling 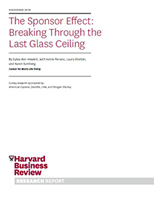 Women aren't making it to the top. Despite gains in middle and senior management, they hold just 3 percent of Fortune 500 CEO positions. In the C-suite, they're outnumbered four to one. What's keeping women under the glass ceiling? High-performing women simply don't have the sponsorship they need to reach the top. Spearheaded by American Express, Deloitte, Intel, and Morgan Stanley, the Hidden Brain Drain Task Force launched a study in 2009 to determine the impact of sponsorship and why women fail to make better use of it. The study found that women underestimate the role sponsorship plays in their advancement. And those who do grasp its importance fail to cultivate it. It's also a classic catch-22: a woman's personal choices, whatever they may be, brand her as not quite leadership material. What will it take to promote sponsorship? In 2010, leading-edge companies are making relationships between sponsors and protegees safe and transparent. Much work remains. But companies that foster sponsorship of their standout women will gain a competitive advantage in talent markets the world over. (12/1/2010, Harvard Business Review Research Report - 77 pages)